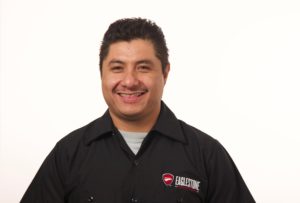 Benito Cuevas is known around the shop as a hard worker with a great attitude. He began his career with us over 15 years ago. His dedication and willingness to learn and grow helped him gain his current position as Lead Grinder. Becoming a master of the grinding machine is a big leap from his previous job where he worked in a lab concocting new flavors for a beverage company. It only took about four months to perfect his grinding technique, but just a few hours to learn that grinding equipment demands respect and can bite you if you don’t give it your complete attention.

Learning and Growing
Benito likes just about every aspect of his job, especially the technical nature of the grinding process. At the same time, he keeps his eyes open for opportunities to learn new and different skills. He appreciates the confidence that Eaglestone has in his abilities and looks forward to a great future with the company.

Sunday is His Funday
A soccer fan all of his life, Benito enjoys watching Mexico, his favorite team, whenever they play on television. He played forward in high school and was known for his ability to put the ball in the back of the net. Today, most of his free time is spent on the sidelines, coaching local players, including his two daughters, who according to him, are pretty darn good. Always eager to take things to the next level no matter what he does, Benito is currently taking classes twice a week to earn his certificate as a referee. Sounds like he’ll be back on the field in no time.