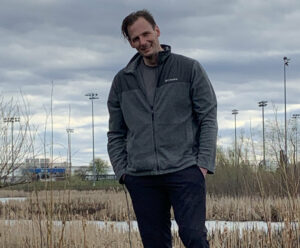 As one of Eaglestone’s newer engineers, Bill Z. has proven to be a driven and talented asset to his team, as well as an ambitious and creative co-worker. Bill’s team-first mentality has helped him find a seamless fit among his peers at Eaglestone over the last two years. From asking and answering project questions to offering helpful suggestions for improvements, Bill brings an everyday dedication to continuing Eaglestone’s mission of providing its customers with the best possible products.

Life in the Fast Lane
Bill has been hard at work building a set of form-driven parts and sub-assemblies for
engineering to help accelerate Eaglestone’s design processes. He takes great pride in the library of standard parts that he’s put together, as his goal is to speed up many of the more mundane aspects of the design process to help his team focus on the more intricate parts of their designs. Bill’s limitless creative spirit has shown through every aspect of his time at Eaglestone.

From Kitchen to Canvas
Outside of work, Bill is an avid cooker/baker who loves delving into new recipes – even if it means having to share his creations and baked goods with the rest of the office! Outside of the kitchen, Bill is a yoga nut with more than 20 years of self-centering experience. He uses yoga as a way to unwind and find some inner peace and quiet while engaging in some physical health and fitness.

Oh, and as if his creativity wasn’t apparent enough already, Bill is also an artist who spends much of his free time sketching just about anything. Much like his work at Eaglestone, Bill has dedicated himself to improving his artistry each day, and he’s even working on his very own graphic novel!

A Valued Asset
Bill’s team is just as thankful for his many talents as he is of theirs, and it shows in their work every single day. Eaglestone is proud to have hard-working engineers like Bill who are willing to think outside the box, while continuing to show a drive for personal growth and professional betterment.

The TrackIQ Sorting Conveyor™. Ready for business.
See How TrackIQ Can Help You Work Smarter