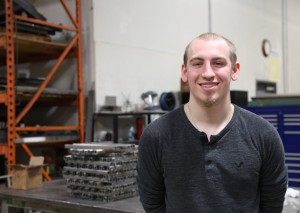 Something of a jack-of-all-trades, Jake Sammauro has done a little bit of everything at Eaglestone, despite his youth. As the son of Eaglestone President Carmen Sammauro, Jake started his career at just 13 years old.

He began by pushing a broom, then headed to our machine shop before becoming Lead Welder and Interning Engineer, his current position. Being part of the business for years and an experienced welder to boot, Jake naturally discovered a new and incredibly cool hobby just six months ago: metal art. 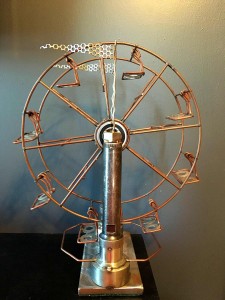 Jake estimates he’s created somewhere between 10 and 15 pieces in his short time as a metal artist. He has a generous mentality about the hobby, focusing on giving his pieces as gifts instead of keeping them for himself or trying to sell them. Making money from it would mean it’s a job for him, and he’s comfortable simply creating.

Jake doesn’t think of himself as an artist as much as an engineer. He pictures the composition of a piece in his mind and then puts the pieces together. If it’s not turning out the way he planned, he has no problem scrapping the piece and starting over. It’s all part of the process. 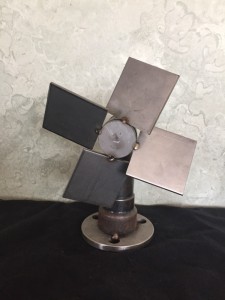 A couple of V-twin engines, one of which he gave to his girlfriend’s father.

-A European-style windmill he made after deconstructing an antique airgun. It’s his favorite piece so far.

-A massive windmill he built and gave his grandmother to display at her home.

-A Ferris wheel that went straight to his cousin.

-A mushroom farm for his mother.

-An Eiffel Tower for his girlfriend.

-A swing set, a carousel and a couple more Eiffel Towers (nailing the recognizable arc of the tower is challenging and rewarding). 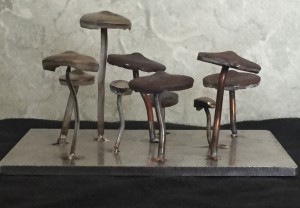 One more pastime Jake enjoys: gaming. He used to play Halo competitively, and would routinely stomp all over his friends even though there were four of them and one of him. His favorite Halo weapon is the sniper rifle, but he doesn’t dabble with any of that quick-scoping nonsense. He takes his time, lines up his shot and doesn’t miss.

When you consider his roots, Jake’s gaming ability makes sense. His mom is a dedicated Call of Duty player to the point that she gets emails from the studio congratulating her on her headshot numbers.

The future is metallic.

Jake has a humble nature and a giving spirit, so he doesn’t think much of himself as a metal artist just yet. But with his background here at Eaglestone and his natural ability to see a piece in his head and bring it to life, he has a bright future as a craftsman.